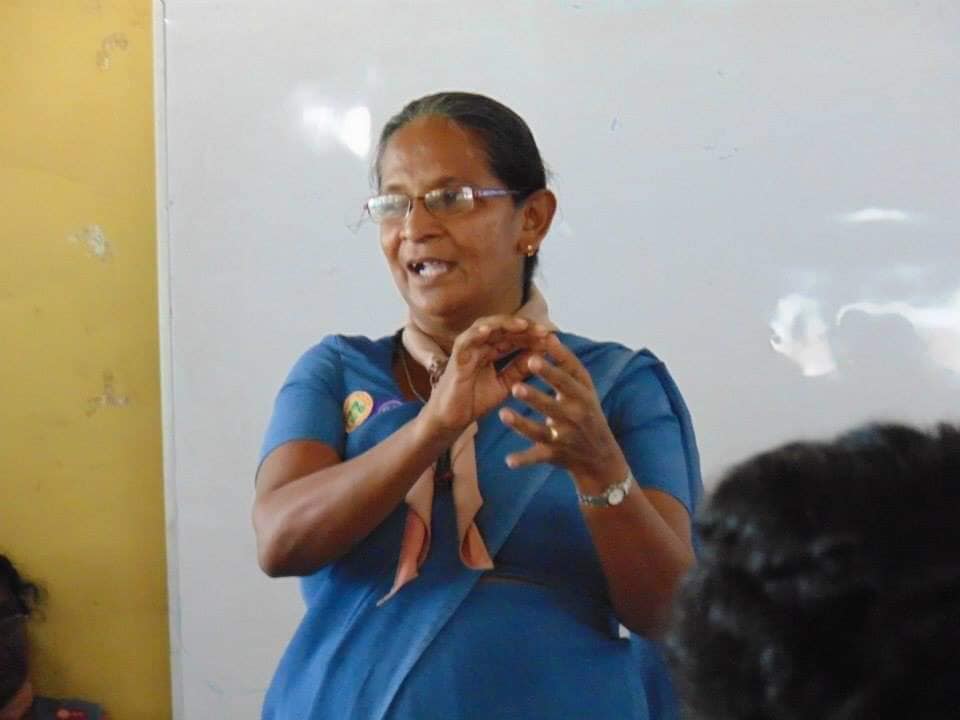 Congratulations to W.P.P.N Renuka Silva, Commissioner of National Scout Headquarters, who has been appointed as the new Commissioner in charge of the Children’s Division of the Sri Lanka Scout Association!

Undoubtedly one of the legends of Puppet Scouting in the country, Ms. Renuka is also a pioneer in Sri Lankan children’s affairs.

Ms. Renuka is a child-friendly character we all know, who always has a genuine smile on her face and can be said to be innocent with a simple demeanor.

She graduated from Visakha, Colombo and the Holy Family Convent in Kalutara as a brilliant student and later successfully completed her higher and vocational education and entered the teaching profession. Today, she is proud to serve as the Deputy Principal of the Kalutara Holy Family Convent where she studied crafts.
She had a strong scout background. That is because of her father. The late Mr. Hillary Silva, who served as the District Commissioner of Kalutara during the 1960s, who rendered invaluable service to the Sri Lankan Scout Movement, was her loving father and that background and home background may have inspired Mrs. Renuka to fall in love with the Scout Movement.

Although her beloved father passed away in 1986, following in her father’s footsteps as a courageous daughter, she is now conquering the world of scouting by going far beyond her father.
She is one of the most senior training leaders we have today. She has played a significant role as the Deputy Director of many Pothaka Advanced Courses and a senior member of the National Training Board. Her dedication from the 4th National Cemetery in 1993 to the 12th National Cemetery this year is commendable. She was the secretary of many Kaboris.

The Hon. Sajeewa Abeywardena, then District Commissioner of Kalutara The Commissioner introduces the Honorable Professor Nimal de Silva to the National Scout Service. On April 23, 2013, the Hon. Professor appointed Mrs. Renuka as the Commissioner of National Headquarters with a strong belief in her. The justice she has done to that belief today is an example to all.

Dear Miss Renuka, I am one of those who think you can do a lot of positive things. Let the thoughts go down! All support! May God bless you and bless you!

(Photos: They were taken during the first and historic Children’s Phase I training course held at the Colombo District Headquarters on November 6, 2014. At that historic training workshop, the then Commissioner of National Training, Sarath Godakandarachchi, was instrumental in making the project a success. Mrs. was able to.)